In the design of our applications, we have tried to decouple all the parts as much as possible. This makes sense to us because when components do not depend on each other, we can easily substitute or change them. The development process is then much faster if we can make changes to isolated parts of the code.

Ok, decoupling sounds like a good idea, but how do we achieve that? In the messaging world (which is quite close to us) there is the publish-subscribe pattern. It separates producers and consumers of messages and inserts a simple interface between them. A producer publishes a message with a certain key and does care about what happens to it afterward. On the other side, a consumer subscribes to a given key (or a set of them), receives messages corresponding with the key, and does not need to know a thing about who produced it. If you want to get a more hands-on explanation, you can take a look at RabbitMQ (which we use as our message broker) tutorials on publish/subscribe and topics.

The publish-subscribe pattern is a simple, but a mighty pattern that helps us design our system. We liked the idea so much that we created a simple library named aiopubsub that is going to be introduced now. From the prefix aio you can guess that it is based on asyncio. This is because most of our applications run on asyncio and it pairs perfectly with the publish-subscribe pattern. Let's see it in action.

First, we need to install it:

To use the library, we need to initialize a aiopubsub.Hub, which will provide the basic infrastructure needed for aiopubsub:

Now, we should agree on what data we want to send through aiopubsub. We are a trading company, so one of the most fundamental structures in our domain is a trade. A trade is a record of a transaction that took place on an exchange: one subject sold a certain quantity of shares, at a given price, at a specific time, to another subject. It can look like this:

It is better to send structured data, and not just some dicts, because then the data have some schema and we can easily use type checking and we know exactly what the data should look like. Another thing worth mentioning is that we use decimal for a price to avoid loss of precision (see What Every Programmer Should Know About Floating-Point Arithmetic for more details). We can then instantiate the trade with some dummy values in the following way:

Another important thing we need to know about is aiopubsub.Key. The key is just a regular tuple that describes the accompanying message with one important feature; we can use an asterisk to describe a set of keys. As an example both of:

are a subset of:

Now, to be able to receive the data, we usually use callback style; we provide a function that should be called when we obtain a message with a certain key:

Let's analyze this piece of code:

We have data that we want to send, and we have a subscriber listening to the data, so let's start sending something:

If we run this with asyncio loop running we should see the following output:

We see that the message from the publisher reached the listener in the subscriber. Yay! As you can see in the following picture, we have only one publisher that publishes one specific message from one stock exchange. The subscriber then listens to all trade messages.

In the last example, you could see that we used add_async_listener; it also has its counterpart add_sync_listener. There is only a small difference between these two functions: add_async_listeners expects a coroutine callback which is awaited, while add_sync_listener expects a normal function, which is called immediately. Except that one is used for async functions and the other for sync functions it brings another subtle detail: an async function is executed eventually while a sync function is executed immediately and a publisher waits until all of its sync subscribers processed the message. Sync listeners thus weaken a decoupling a bit.

The previous example may seem quite lengthy in what it does; it only calls on_trade when there is a new trade. We don't need such instrumentation to do that, but the fun starts when we add more publishers and subscribers.

We can add a subscription to the existing subscriber that will read only trades from NYSE:

This can be a completely separate code, but we have automatically ensured that all messages will end in our on_trade listener. We don't need to have the function available here; we don't need to know who exactly listens. It's decoupled.

We have a few lines of code added, but now we have an architecture where there are two publishers from two stock exchanges. The function on_trade is called on every trade while on_nyse_trade only on a trade from NYSE. And we can make it more and more complicated as our use-case requires.

We can easily add new stock exchanges, other company shares, or new types of data. Everything is in one system and we know that the message will reach the desired destination.

The following image captures the situation after several additions of new publishers and subscribers. A Subscriber still listens to all trades (from NASDAQ Publisher and NYSE Publisher). NYSE Subscriber listens only to trades from NYSE Publisher.

We have presented the architecture pattern, publish-subscribe, that is used to decouple producers and consumers in messaging brokers. We utilize it inside our applications by using the package aiopusub because it gives us great flexibility in managing the vast amounts of different data we process. We have presented a simple example of usage that can be easily expanded according to the data we want to process.

We use aiopubsub in our applications that process real-time data, and it allows us to keep concerns of each code apart, separated from others, and helps us in code reuse.

You can see the full code of our example here: 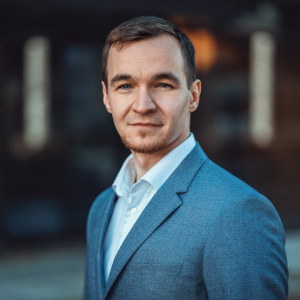 Hey, my name is Petr. I started working at Quantlane as a programmer and later led the development team. I currently focus on big architectural issues in a small specialised team.

My main focus is on messaging systems, performant data ingestion, and everything that needs to be optimized on the backend. I'm interested in complex systems, physics, and arts.